About two years ago I stumbled upon a thread on Nasioc called “EJ207 Owners”. It completely changed my mind when it comes to the GD subaru chassis. For years in the Subaru community we have had problems with the motor in the USDM STi mainly due to poor piston design and some very sketchy tuning. I found that there was an alternative out there for people who were willing to try something different.

Think of the EJ207 like a USDM EJ25 but with an added 1000rpm and excellent flowing heads. Now this motor is not for everyone because you do sacrifice some torque on the low end but Subaru did something to compensate for that.

Now obviously there are also differences between the actual blocks of the two motors , For instance here is a direct comparison of the EJ207 and the USDM EJ257

So it seems that the EJ257 was created from an EJ207 block but then modified to add another half liter of displacement. You can also tell that the pistons are significantly larger on the EJ257. The EJ207 is also only drive by cable where as the EJ25 is drive by wire which in my opinion lacks the response of the physical connection that drive by cable brings.

The version 7 STi came standard with an EJ207 fitted with a VF30 turbocharger , 565cc injectors and a larger TMIC. The turbocharger itself is extremely similar to the USDM STi’s turbo which is a VF39. The transmission code would be TY856WB1AA which means it has an open front differential , viscous center differential and an AP Suretrac R180 differential. Obviously there were complaints that the open front diff led to more understeer which they were right because it did. To remedy this the more hardcore enthusiast could opt for the upgraded trim levels of RA , Spec C RA or S202.

The track oriented version 7 STi was called the Spec C and had a ton of extras from Subaru’s in house tuning company STi. It looks exactly like an STi Ra but with an added VF34 turbo which is ball bearing for added response. The Spec C also had better flowing heads commonly referred to as “big port” heads, These later became standard on the Version 8 / 9 STi. The Spec C also had more aggressive cam’s than the Standard Sti , These cams also became standard on future EJ207 powered STi’s. For added safety when driving the car an external oil cooler was standard on the Spec C. The most noticeable feature when people were to drive a Spec C would be its handing due to an extremely fast steering rack comparable to the Evo 9 MR. 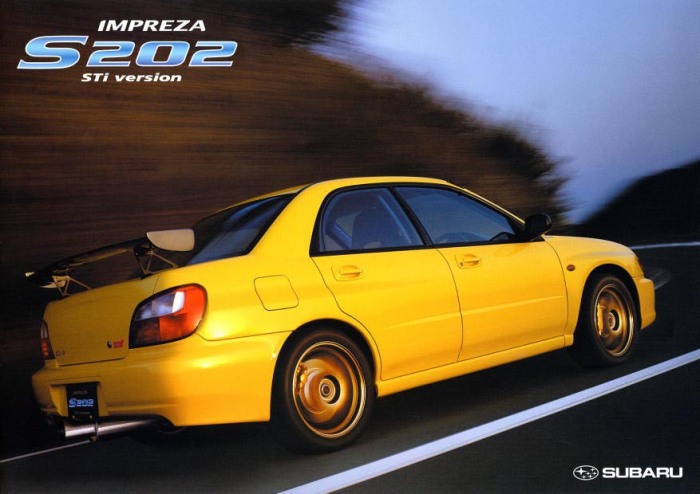 The rarest trim level for the Version 7 STi was the S202 package which was a Spec C RA taken to the extreme. It had the same EJ207 with a VF34 making over 300hp but weighted under 3,000 pounds ! If you want the full specifications they can be found here !

To conclude the Version 7 STi was and still is an iconic look for the GD STi , The motor is also rock solid as many people have pushed them far and above 400hp

3 thoughts on “The Version 7 STi and its many Trims”